In the Heart of Central Europe

Czechia (in Czech: Česko), a landlocked country in Central Europe, has been a member of the European Union since May 1, 2004. The country borders with Poland to the north, Germany to the northwest and west, Austria to the south, and Slovakia to the east.

The historic city of Prague (in Czech: Praha), a major tourist attraction, is its capital and largest city with a metropolitan area population of over two million (just over one million within the city proper).

Archaeologists have found evidence of prehistoric human settlement in the area dating back to the Neolithic era. Migrations to the area in the classical era included the Celtic Boii (third century BC) and the Germanic Marcomanni and Quadi tribes (first century). During the Migration Period (ca. fifth century), many Germanic tribes moved westward and southward out of Central Europe. In an equally-significant migration, Slavic people from the Black Sea and Carpathian regions settled in the area (a movement that was also stimulated by the onslaught of peoples from Siberia and Eastern Europe: Huns, Avars, Bulgars, and Magyars). Following in the Germans' wake, they moved southward into Bohemia, Moravia, and parts of present day Austria.

During the seventh century, the Frankish merchant Samo, supporting the Slavs fighting their Avar rulers, became the monarch of the first known Slav state in Central Europe. The Moravian principality arose in the eighth century.

Middle Ages to the Twentieth Century

The Bohemian or Czech state emerged in the late ninth century when it was unified by the Přemyslids. The kingdom of Bohemia was a significant local power during the Middle Ages. It was part of the Holy Roman Empire during the entire existence of this confederation.

Religious conflicts such as the fifteenth century Hussite Wars and the seventeenth century Thirty Years' War had a devastating effect on the local population. From the sixteenth century onwards, Bohemia came increasingly under Habsburg control, since the Habsburgs became first the elected and then hereditary rulers of Bohemia. After the fall of the Holy Roman Empire, Bohemia became part of Austria-Hungary.

Twentieth Century and Beyond

Following the collapse of the Austro-Hungarian empire after World War I, the independent republic of Czechoslovakia was created in 1918. This new country incorporated regions with majority German, Hungarian, Polish and Ruthenian speaking populations. Although Czechoslovakia was a centralist state, it provided what was at the time rather extensive rights to its minorities. However, it did not grant its minorities any territorial political autonomy, which resulted in discontent and strong support among some of the minorities to break away from Czechoslovakia. Adolf Hitler used the opportunity and, supported by Konrad Henlein's Sudeten German Party, gained the majority German speaking Sudetenland through the Munich Agreement. Poland occupied areas with Polish minority around Český Těšín, while Slovakia gained greater autonomy, with the state being renamed to Czecho-Slovakia. Eventually Slovakia broke away further in March 1939, allied to Hitler´s coalition; the remaining Czech territory was occupied by Hitler, who installed the so-called Protectorate of Bohemia and Moravia, which was proclaimed part of the Reich and where the Protectorate President and Prime Minister were subordinate to the Nazi Reichsprotektor (imperial protector). Approximately 390,000 citizens, including 83,000 Jews, were killed, executed or killed in the war, and hundreds of thousands of others were sent to prisons, concentration camps, or forced into labour. The Czechoslovak government-in-exile and its army fighting against Nazis were acknowledged by the Allies (i.e. Czech troops in Great Britain, North Africa, Middle East and Soviet Union).

In 1945-6, almost the entire German minority of pre-War Czechoslovakia, approximately three million people, were expelled to Germany and Austria. During this time, hundreds of thousands of Germans were held in prisons, detention camps, and used in forced labour. In the summer of 1945, there were several massacres with at least 20,000 deaths. Only 250,000 Germans who had been active in the resistance against the Nazis or who had been deemed essential to the economy were allowed to stay, though many of them emigrated later.

Czechoslovakia uneasily tried to play the role of bridge between the West and East; however, the Communist Party of Czechoslovakia came to power in February 1948, bringing the country within the Soviet sphere of influence. In August 1968, an invasion by Warsaw Pact troops ended efforts by the country's leaders to liberalize party rule and create "socialism with a human face" during the Prague Spring.

In November 1989, Czechoslovakia regained its political independence through a peaceful Velvet Revolution. On January 1, 1993, the country peacefully split in two, creating the independent Czech and Slovak Republics.

The Czech landscape is quite varied; Bohemia to the west consists of a basin, drained by the Elbe (in Czech: Labe) and Vltava rivers, surrounded by mostly low mountains (the Sudeten with the Krkonoše region, home to the highest point in the country, Sněžka, at 1,602 metres [5,256 ft]). Moravia, the eastern part, is also quite hilly and is drained predominantly by the Morava river, but also contains the source of the Oder (in Czech: Odra) River. Water from landlocked Czechia flows to three different seas: the North Sea, Baltic Sea, and the Black Sea.

The local climate is temperate with warm summers and cold, cloudy, humid winters, influenced by a variety of maritime and continental influences. 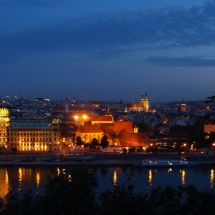 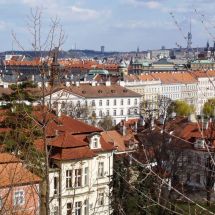 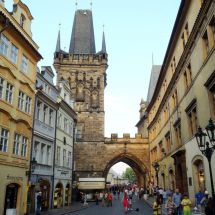 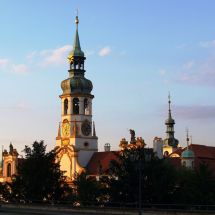 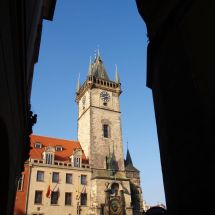 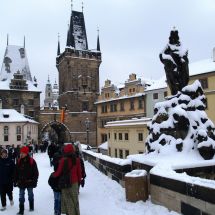 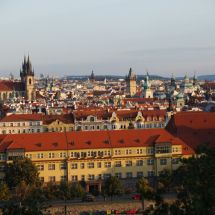